How to Mount a Windows Hard Drive in Linux

In order to perform the mount, we need to install the ntfs-3g package, which is a Linux NTFS userspace driver. This package comes from EPEL if you're using CentOS/RHEL, so if you have not yet configured your system to use the EPEL repository, run the following command.

[root@centos7 ~]# yum install epel-release -y
Now we should be able to install the ntfs-3g package from the EPEL repository.

[root@centos7 ~]# yum install ntfs-3g -y
Otherwise if you're using Ubuntu/Debian, you should just be able to run 'apt-get install ntfs-3g' straight away. In my Debian 8 installation it was already available so I was able to mount NTFS without any problems.


Courtesy of https://www.rootusers.com/how-to-mount-a-windows-ntfs-disk-in-linux/
Posted by Unknown at 8:11 AM No comments:

Looks like the TSLA bears have found another fake story to promote.  Suddenly, all over the news and twitter are reports that Elon is the highest paid CEO ever!  Except he's not, and anyone being intellectually honest knows it.  The one that surprised me was the Mercury news, I was surprised that an actual respectable newspaper would help to perpetuate this obviously false story.

Oh wait, they're not promoting fake news afterall, in the third paragraph they write the following sentence: "However, Musk's realized compensation last year was $56,380"
Now I'm just confused, I thought he was highest paid CEO ever?  Oh well, made me click, you win.
In case you're interested, below is a snippet from Twitter explaining what really happened, spoiler, he made minimum wage as required by California law. 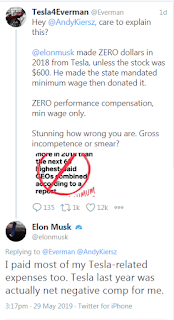 -Ryan
Posted by Unknown at 6:00 PM No comments:

As for the demand question

According to Bloomberg: Last year, the world's consumers bought more than 2 million electric vehicles. By 2025, they'll be buying 10 million; by 2040, 56 million, according to BloombergNEF's new long-term Electric Vehicle Outlook.
According to Cathie Wood of Ark Invest: .@skorusARK has based our battery pack system research on Wright's Law, which is foundational to our forecast of 26 million global EV sales by 2023.
-Ryan
Posted by Unknown at 8:56 AM No comments:

Bob Lutz is once again calling for Tesa's demise, telling CNBC on Tuesday April 2nd, 2019 that Tesla is going to have a very bad time in the next 5 years. He says, and I quote:

"Currently I see no bright future for Tesla whatsoever...its very hard to conjure up a scenario by which Tesla looks good 5 years from now"

You know, I'm not sure I even understand why CNBC has him on, part of me thinks they're trolling him and they think its funny to have this old timer on time and time again just to humiliate himself.

But hey, at least he's consistent.  Maybe we should worry if ever turns into a Tesla bull.


Judge may order Musk to step down as CEO, Oppenheimer analyst says from CNBC.

Email ThisBlogThis!Share to TwitterShare to FacebookShare to Pinterest
Labels: tesla

https://www.youtube.com/watch?v=wbygUpab7Fg
-Ryan
Posted by Unknown at 8:45 AM No comments: